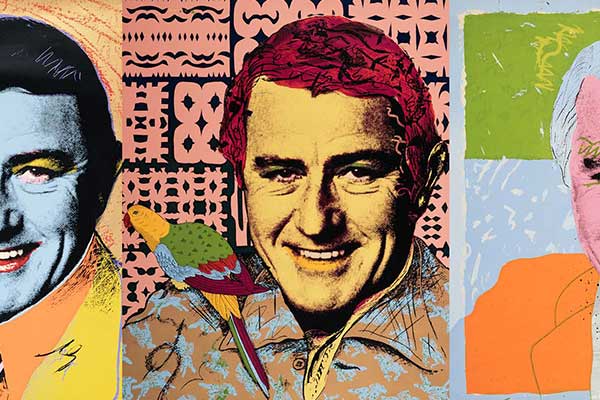 To celebrate the 40-year anniversary of the inception of a regional gallery in Penrith with the acceptance of the Lewers Bequest and significant support from the NSW Government, Penrith Regional Gallery, Home of the Lewers Bequest presents a suite of exhibitions titled Dream Realised: our community victory until 31 July.

The exhibition suite Dream Realised: our community victory is comprised of three exhibitions. One in the heritage modernist Ancher House, called Art Lives Here celebrating the creative partnership of Margo and Gerald Lewers; another in the Lewers House called Circle of Friends, showcasing acquisitions funded and supported by the Friends of Penrith Regional Gallery, and a solo exhibition of the first president of the Friends (formed in 1979) Warwick Fuller, Warwick Fuller – Chasing the Light.

As part of the new COVID-safe measures, the gallery will be implementing timed ticketing with a maximum of 50 people per timed session. Social distancing rules and measures remain paramount in the Gallery, with new stringent cleaning guidelines in place.

The exhibition will be open across three ticketed sessions per day, 10-11.30am, 12-1.30pm and 2-3.30pm, seven days a week, with time for cleaning in between each session. Please note that currently, our timed sessions are available for bookings from 28 June – 31 July 2020 only.

Bookings for timed sessions are available online or at the venue.Click here to book your session

Gerald and Margo Lewers were leading artists in the development of modernism in Australian art, and pivotal figures in the Sydney creative scene. Both were keenly interested in the evolution of new and unique thought, artistic practice, debate and visual arts education.  It was Margo’s wish that upon her death (1978) her home at Emu Plains would become an art centre where travelling exhibitions could be held and artists could meet to exchange ideas.

In 1980 the community’s dream was realised in the decision to establish a regional gallery at Emu Plains thanks to the generous Lewers Bequest. The Lewers’ creative spirit lives on through the Gallery programs offering exhibitions, gardens, architectural heritage, education and an art collection within the unique property that was Margo and Gerald’s home.

Penrith Regional Gallery, Home of the Lewers Bequest was the private home of two artists – sculptor Gerald Lewers and his wife, painter Margo Lewers – and their daughters Darani Lewers and Tanya Crothers (nee Lewers). This property and a collection of artworks, furniture, and ephemera was gifted by the daughters to Penrith City Council in 1980 and has been operating as a public gallery since 1981. The exhibition Art Lives Here presented in Ancher House presents work from the Collection which speaks to the creative partnership that was developed between Margo and Gerald Lewers throughout their lives and by extension the influence they imparted on frequent artist visitors including Frank Hinder and Sonia Farley, Gerald’s niece.

Celebrating the contribution of the Friends to the Penrith Regional Gallery, Home of the Lewers Bequest the exhibition Circle of Friends showcases many of the works purchased with assistance of The Friends. Artists presented in the exhibition are also amongst those who are known to have visited Margo and Gerald at the Lewers’ property including Lyndon Dadswell, Elwyn Lynn, Henry Salkauskas, Bim Hilder, Stanislaus Rapotec and Robert Klippel.

Kanimbla NSW artist Warwick Fuller was the founding President of the Friends of Penrith Regional Gallery, Home of the Lewers Bequest. Fuller’s highly successful career as an artist commenced in 1978 at the same time as he headed up the Friends group of community members campaigning for the Penrith City Council to accept the Lewers gift and establish a regional gallery in Western Sydney. Fuller has been Prince Charles’ official Australian tour artist three times and a number of his works are in the private collection of Their Royal Highnesses, the Prince of Wales and the Duchess of Cornwall. Chasing the Light is Fuller’s first solo exhibition in a public gallery though he does exhibit regularly with his gallerist Geoff White at Lost Bear, Katoomba. Fuller’s painting focuses on capturing the light in Australian landscape, leading him to travel Australia extensively. Largescale works by Fuller can be seen in hotels around Australia including a vast panoramic landscape at the Emirates exclusive One&Only Wolgan Valley.

Neville Wran portraits by Paul Worstead, conceptual artist, poster maker, T-shirt and fabric designer. Neville Wran, while Premier of NSW (1976 – 1986) contributed $1mil from the NSW State government to secure the establishment of the Gallery and said at its official opening the following year, “This is the first regional art gallery to be opened in the western region of Sydney, where arts and cultural services were long neglected…The house, as we know, was always a centre of vigorous intellectual discourse and creativity, and as a gallery will continue to be a hub of artistic life in this state and this region.”