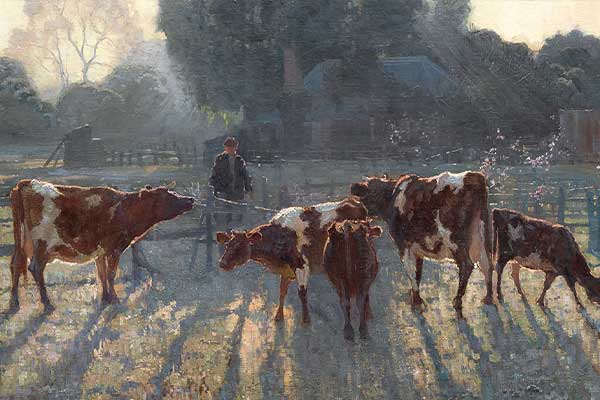 The Art Gallery of New South Wales is delighted to present Fieldwork: Landscapes West of Sydney, a travelling exhibition – coming to Penrith Regional Gallery from 12 March to 9 May 2021 – drawn from the Gallery’s treasured collection of late 19th and early to mid 20th-century paintings and works on paper.

A highlight of the exhibition is Spring Frost 1919, arguably Elioth Gruner’s crowning achievement. Painted at Innes Farm in Emu Plains, the painting was awarded the Wynne Prize in 1919 and is one of the most celebrated and recognised works in the Gallery’s collection. Gruner’s Spring Frost is being displayed within close proximity to where it was originally painted in Emu Plains.

Assistant curator of Australian art Nick Yelverton also said, “Fieldwork explores how the combination of plein air painting with budding nationalism and a deepening appreciation of Australian scenery during the late 19th century, inspired landscape artists to escape the city and portray nature and rural pastimes.

“The exhibition also addresses the influence of modern art and the shock of the First World War on this tradition of landscape art,” Yelverton said.

Alongside Spring Frost, visitors to Fieldwork will see significant works by Julian Ashton and Arthur Streeton who were proponents of plein-air (outdoor) painting west of Sydney centre. Other key works in the show include Streeton’s Prospect Reservoir 1895, Sydney Long’s Midday 1896, Roland Wakelin’s Narellan 1917 and Hilda Rix Nicholas’ Through the Gum Trees, Toongabbie c1920.