Line Work: Rivers of the Basin 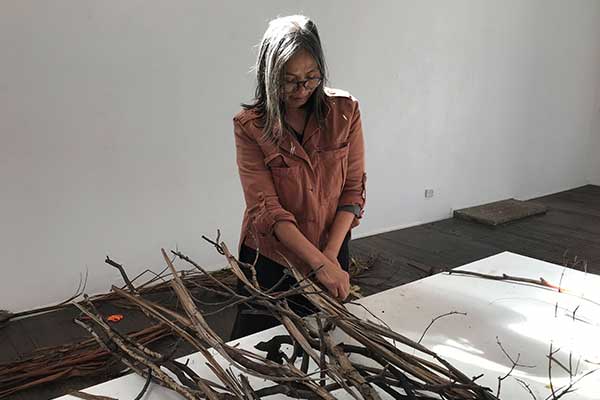 Inherited legacies of the site where PRG is situated, on the banks of the Nepean River

Line Work refers to an iterative and ongoing collaboration between Sydney-based artists, Sue Pedley and Phaptawan Suwannakudt. Phaptawan and Sue have been producing a series of layered and experimental drawings using a variety of materials, titled Line Work (#1 – #27) since March 2019. Through repeatedly working over marks made by the other, they are able to bring lived experience and individual perspective to the resulting artworks.

Line Work: Rivers of the Basin is a response to the inherited legacies of the site where Penrith Regional Gallery is situated, on the banks of the Nepean River at Emu Plains. The exhibition occupies the four rooms, hallway and veranda of the Lewers House Gallery, once the home and studio of Margo and Gerald Lewers, on the land of the Darug people.

Both historically and in the last year, Emu Plains has felt the impact of extreme heat waves, fires and floods. The 19th Century House, and surrounding gardens on the banks of the river hold the memories of families and communities who have lived and surviving natural disasters, as well as the lasting impact of colonisation and urbanisation.

Through this new body of work, the artists explore the four elements of matter; water, wind, earth and fire from a multilayered cultural perspective. Natural fibres including banana leaves and bamboo from the Lewers Garden, have been invoked by the artists to create drawings and rubbings, as well as sculptural and installation works. At its crux, Line Works is an acknowledgement of the interwoven and connected lines that marcate and mediate our lives, between the past and now.